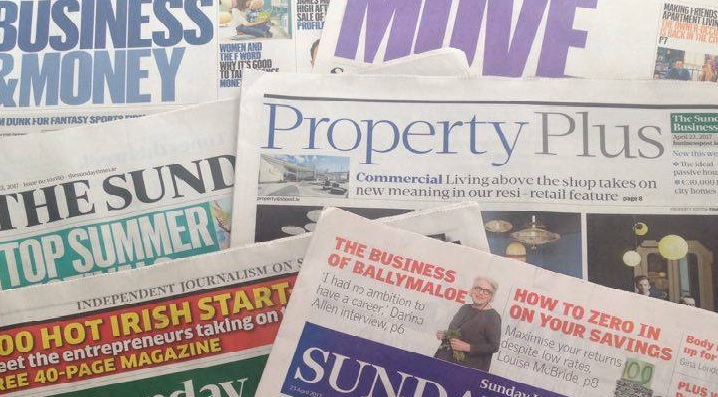 As we approach August, the property supplements slow or stop altogether for the summer months and property news itself is slowing down.  The next four weeks are very likely to be a rehashing of existing stories but, sometimes, that is where the best analysis is to be found so let’s stick with it. The following is a snapshot of some broader property-related stories from across the main broadsheets and industry publications.

The lead story on the front page this week is that ‘Builders and bankers units to save €20k buyers’ grant’.  This relates to the controversial Help-to-Buy (HTB scheme).    Developers and lenders want to see it retained, yet, it appears to be linked to recent house price inflation. John O’Connor, head of the Housing Agency, has come out against the value of the grant/tax rebate, suggesting that should only be a  “few thousand euro”.

It is an issue that I am professionally torn on as, on one hand, it is not a help to buyers.  In fact, while empirical evidence is not available given the early stage of the initiative, anecdotal commentary suggests that it drives the prices of new homes prices upwards.  In any event, it puts our returning expat first-time buyers at a marked disadvantage and this is not something that I am comfortable with.  On the other hand, I know from discussions with developers and building contractors, including the IHBA and CIF, that this scheme is vital when it comes to looking for development finance as it reassures lenders that finance-ready home buyers exist for the new homes, once completed.  One leading home builder I spoke with recently told me that more than 45% of buyers within his current housing development (which is definitely at the upper/pricier spectrum of the first-time buyer market) have applied for the grant.

This might sound, therefore, like a developer subsidy but the reality is that it is a supply initiative, dressed up as a buyer initiative – we need supply initiatives but it is not politically popular to articulate that.  Perhaps the scheme is not the problem, but rather the mis-selling of it to the wider public.

My own opinion is that once a policy is adopted, it must be allowed to run its course or at the very least, given a fair opportunity (unless it is actively harmful to allow it to continue) and less than 12 months is not a long enough period to pass judgment on the scheme.  Furthermore, it will cause lenders and others who have relied on it to distrust further policies initiatives introduced.  We need to leave it (for the moment at least) and learn from it.

Last week we noted that architect Des McMahon’s comments to Tom Lyons that he was “flummoxed” by the decision of DCC to reject developer Johnny Ronan’s proposed 22-storey tower on Tara Street as the proposed building had the power to become a catalyst for urban development.  The plan was turned down on grounds including ‘visual impact’.  Johnny Ronan himself pointed out that Ireland risks falling behind international rival cities if all tall buildings are blocked.

On the front page of the SBP, Hugh O’Connell writes ‘Government to push for high-rise apartments’, referring to proposed new laws to remove height restrictions in the heart of Dublin.  The Minister for Housing, Eoghan Murphy, said that he is examining changes that are needed to make high-rise apartment buildings more viable.  This flies in the face of Dublin City Council’s current development plan, which reaffirms Dublin “as a predominantly low-rise city”.

Pages 8 and 9 carry an in-depth look at the appointment of Eoghan Murphy, Minister for Housing, Planning and Local Government.  As mentioned above, this is the kind of article/commentary that we are likely to see appearing in the Sunday broadsheets for the next few weeks.  Key insights are as follows:

Page 2 carries a piece by Stephen O’Brien ‘Ireland plans €80 billion infrastructure spend’  – this is the signal that developers, building contractors, investors and funds alike have been waiting for.   Infrastructure has been a massive challenge to viable development in provincial Ireland since the crash and news that the state spend will double over the next decade is positive and to be welcomed.  Projects include bringing forward the Dublin airport rail link by 12 months, extension of the existing motorway network from Cork to Limerick and from Tuam to Claremorris.