Firstly, as awards season closes in there were four different awards events on this week,  with three on the same night. Congratulations to all those worthy companies short-listed and to each of the winners.  Entering prestigious awards is a massive job and the short-listing criteria is tough so shortlisted organisations can be proud to be listed among the very best in the business, well done!

As a side note, regular readers will know that I try to keep politics out of my property synopsis each week  – as I wish we could keep it out of housing policy issues altogether; however,  quote of the day  must surely go to Lise Hand writing her column in The Sunday Times about the Francis Fitzgerald furore:

“If Shane Ross throws her under the bus, it’s the nearest he’s got to public transport.“

I tend not to cover issues and stories about homelessness in my weekly roundup and there’s a good reason for this; I believe that we have allowed so-called ‘charities’ to use the crisis to jockey for position and access to state funds.  It is not popular to criticise charitable work  particularly within our own industry,  however, there are no fewer than 23 registered charities and up to 70 organisations claiming to help people in homelessness and drawing down state funds in order to do this.  Clearly what they are doing is not working.  As the vast majority of these have paid  management and  staff with organisational expenses like office premises and auditors,  it is not a stretch to  see resources wasted. Unfortunately we have allowed homelessness to be turned into an entire sector within the property industry and this sector is  employing close to 1000 people and has annual payroll in excess of €80 million.  It is crucial that we allow the organisations that are equipped to actually help with this crisis to do so and effectively get rid of the others, which are draining much-needed resources. I spoke about this difficult topic on Newstalk FM last week and you can listen back (with an open, compassionate yet logical mind please) here:

John Burns writing in his Atticus column today reveals that an Taoiseach  has received support from an “unexpected quarter“ for his comments about homelessness.  Independent councillor Jimmy Guerin  spoke out about the emerging homelessness “industry“ in Ireland.  He describes how recent policy changes  instructing local authorities that half of all homes they allocate must go to people in emergency accommodation has had unintended  consequence. He went in to suggest that “People soon realised it is far better to live in emergency accommodation and wait a year or two on a house, as opposed to a wait of 10 years or more on the ordinary housing list“.

It is vital for me to point out here that there is a handful of established and highly effective  charitable organisations doing incredibly important work with people in homelessness and they deserve all of our support and the funds available through the state to continue.

In fact, the Simon Community, Focus Ireland and Peter McVerry Trust have joined forces to set up the Refund Project.  This is an excellent initiative appealing to people who are in a position to donate their Irish Water refund.  The refunds are estimated to amount to €173 million.  While many families will need this refund, for others, the money spent will already have been written off and  this might be a way to help with our homelessness crisis in time for the Christmas period.  If you can support this critical work, through these credible organisations, you can donate at refundproject.ie from December 4th. 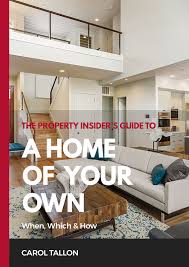 The first three books in the series are now available, starting with:

The Property Insider’s Guide to A Home of Your Own: When, Which & How