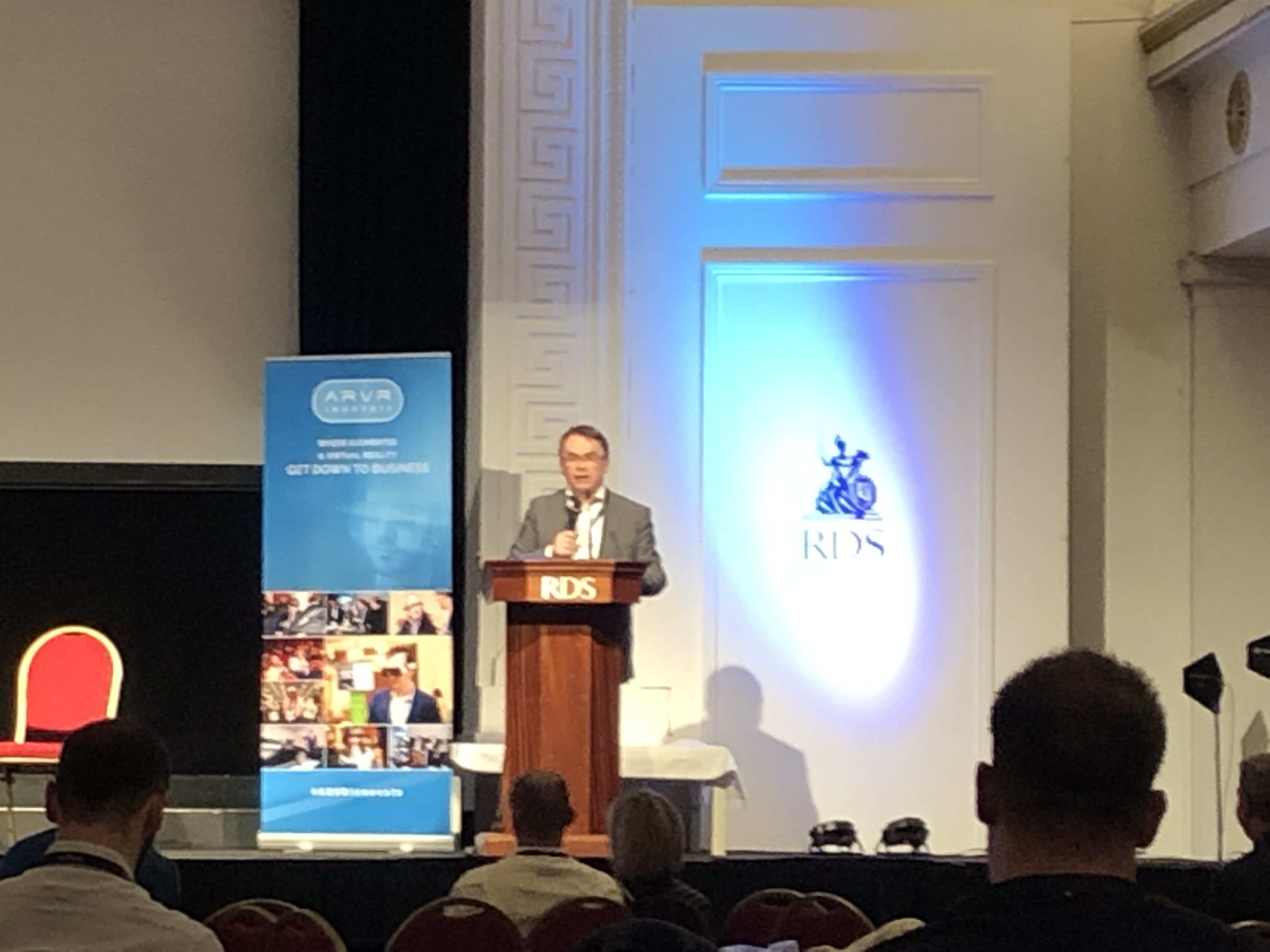 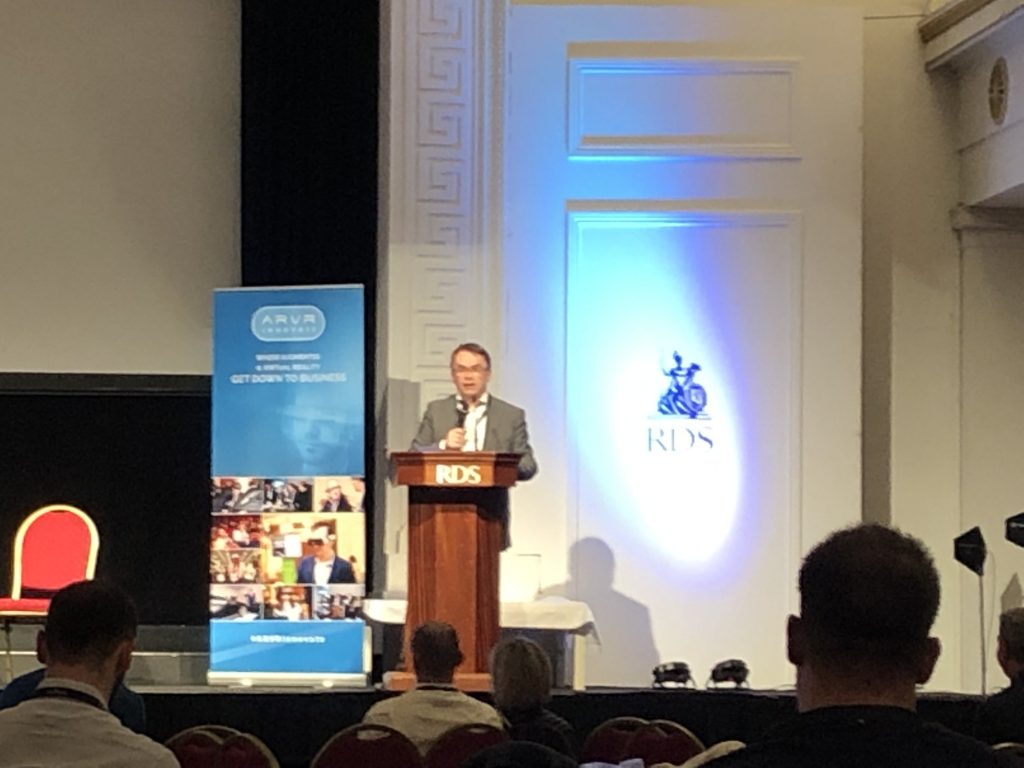 International immersive conference, ARVR returned to the RDS Dublin on Friday, May 10th and the ARVR Innovate Conference is to show off the benefits of immersive technologies. Immersive technologies are extremely cool, and the mixture of augmented, virtual and mixed realities is something that most businesses should be paying attention to. It was a relaxed event that had a nice number of people to mingle with while learning more about the upcoming technologies and ones that exist now.

There were loads of exhibits showcasing the best of virtual, augmented and mixed reality technology while the main stage had dedicated and experienced speakers in immersive technologies to share their knowledge on the future. Dean Johnson hosted this year’s conference and he is an accomplished Design Leader, Writer, Presenter, BBC Tech Pundit and former Head of Innovation at Brandwidth. Alex Gibson, Founder of ARVR Innovate was close by to ensure the days events went off without a hitch and he did an immense job in organising such a good day.

Jay Latta, ARVR Futurist, CEO and Founder STINT (Strategic Intelligence for New Technologies) talked about ‘Shaping the Future of Technology’. Followed by Paul Sweeney of COO, DAQRI whose topic was ‘Using AR to Power Productivity in Manufacturing.’  Jan Pfleuger, from Audi and advisXR was thoroughly engaging with his notable experience and points on the different factors a company should consider with AR/VR.

Some of the other morning speakers included, Michael McGlade, Creative Director of Yellow Design. Paul Hollywood, Product Development Director at vTime and James Watson, CMO of Immerse. James was truly honest, and he showed some impressive technology in Oculus Quest (in the exhibition area) as well as telling listeners how their company had helped DHL learn to pick up boxes properly with VR.

A panel discussion for the morning was chaired by Dr Michael Rygol, Managing Director of Chrysalis Forge. The panellists were made up of Andreas Hartmann, ARVR Specialist of Medtronic, Paul Sweeney, COO of DAQRI and finally, Cortney Harding, CEO of Friends With Holograms. Paul Shanahan of Microsoft discussed ‘Mixed Reality and HoloLens 2 – What this means for business’ before the lunch break. Paul’s talk was based around the HoloLens 2 and what the future may hold for the technology.

Dean Johnson took to the stage to open the afternoon talks but not before speaking about ‘Immersing a Brand, New Dimensions, New Stories, New Audiences’ himself. His talk was followed up by Sandra Whelan, COO of Immersive VR Education on how VR Training is not just a fad. Her talk was enlightening and inspiring. The Titanic VR piece was simply beautiful, and it was a true sign of compelling storytelling and emotion too.

The panel discussion of the afternoon chatting about ‘Making Compelling Consumer Immersive Experiences’ was chaired by Ron Immink, Author and Entrepreneur who has extensive experience in areas of SME engagement and entrepreneurship. Panellists included, Sarah Jones, Head of School of Media in Birmingham University, Dave Vincent, Chief Digital Officer of Tourism Northern Ireland, Stella Setyiadi, Chief Marketing Officer of Octagon Studio, Peter Woodbridge, Creative Director of Immersive StoryLab and Camille Donegan, General Manager and Producer at Virtual Reality Ireland. Camille Donegan mentioned how it wasn’t easy to make money in the AR VR space and Stella Setyiadi said that getting people to download the apps was a big challenge. Niall O’Driscoll, Co-Founder of vStream, spoke about how VR is helpful for healthcare and it was hugely insightful.

The day ended with a concluding panel including, Isabelle O’Keefe, Principal at Suir Valley Ventures, Nigel Mc Alpine, Immersive Technology Lead of Digital Catapult, Andy O’Sullivan of Liberty Information Technology and Alex Gibson of TU Dublin and Founder of ARVR INNOVATE talking about the prospects for business and consumers in the future.

It was an excellent event and I can heartily recommend it for anyone with an interest in exploring the full potential of immersive technologies.