NewsDigital Transformation of the Property Industry: #Proptech for Estate Agents in Ireland 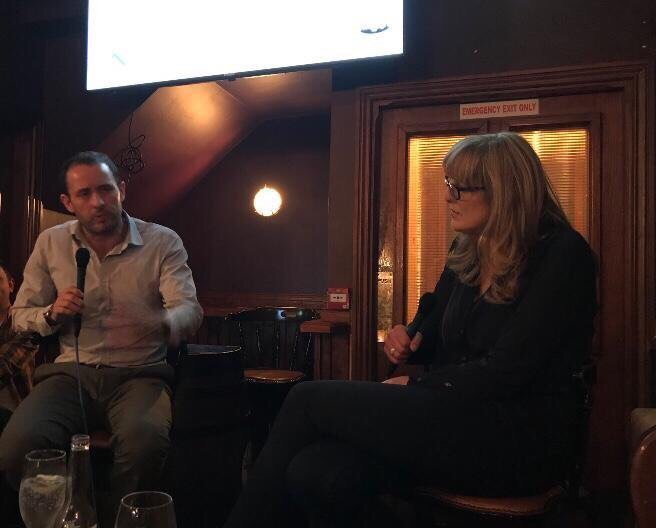 As regular readers will know, Tom Courtney of Irish proptech company Property Basecamp organised a #Proptech meet-up last Monday and we were delighted to welcome UK guests James Dearsley of Proptech Consult together with Eddie Holmes and Sammy from the UK Proptech Association.

I was fortunate to have the opportunity to host a fireside chat with one of the industry’s leading innovators, Nicholas Polley  of 3D Design Bureau. Most people will be familiar with his work for some of the most prolific property developers in Ireland through images splashed across every business and property newspaper.  During our chat, Nick spoke about the origins of his business, almost two decades ago, in particular, the challenges he faced during the downturn. There was silence in the room as every construction and property professionals nodded agreement with the weight of their own experiences.  He also spoke about the importance of diversification  and interestingly, his plans for the next few years, understanding that construction is indeed a cyclical business, however distorted that cycle might be right now.  He is certainly one of the most relevant, insightful and engaging speakers I have interviewed on the topic of business recovery and strategic growth.

While it was a sombre note to leave hanging in the room, I think it’s an important question:  Are we willing to look beyond the next few years of plenty, ensure the robustness of our business models and strategically plan for the next dip?

James then presented his vision of the future of the property industry and the role that technology will play in that.  He started by explaining how the proptech sector has evolved over the last three to four years, and then went on to discuss the major industry report published last year by Professor Andrew Baum entitled Proptech 3.0.  As is customary in such talks, he endeavoured to define what exactly Proptech is; one unattributed quote  defined it by asking the following question:

“Is proptech creating a whole new industry, or is it just a more efficient way to extract money from a fat dinosaur that’s got bad knees and has lost its agility?”

Ever the diplomat, James revised this to read:

“Proptech is a symptom of a wider change in the real estate industry, it’s creating a more efficient way to help lost dinosaurs.”

He went on to explain how this will show traditional estate agents a new way to do business that will generate new outcomes for them.  It will also give them the opportunity to extend what they do and find new ways to add value within the industry.

He putting this progression in context by charting the leaps made since the early days of the first industrial revolution, heralding the introduction of machines, steam and water power in the 1800s, through to the 1850s when we started to see the replacement of physical labour with machines. Then, in the 1900s, we saw the introduction of electricity and mass production, citing, Ford as the classic example.  Jumping ahead, he describes the period we are in now as ‘Industry 4.0’, the cloud computing era!  What is surprising is the sheer speed and scale of advancements today; this makes predicting the future of technology, beyond a three to five year period,  a subjective exercise based on the where we find ourselves now and our acceptance of change.

He references approximately 1,600 proptech companies (via Venture Scanner). Here at Proptech  Ireland we put the Irish equivalent figure somewhere between 30 to 35 companies (not including exogenous start-ups), with approximately 15 to 20 of those  directly feeding into the Irish market place, either commercially or on a pre-commercial/ market research basis. In fact, this is one of the key functions of proptech Ireland, to facilitate or source testing environments for indigenous proptech start-ups. As always, we are looking for portfolio managers to accommodate this.

One of the interesting technologies that he discussed was the whole area of voice search. We know that several of the technology giants based in Ireland are focused on this right now, and according to James, Amazon controls  two-thirds of the smart speaker market in a concerted effort to get inside people’s homes.  We have discussed this previously under the guise of ambient computing, which is essentially the ubiquitous technology that is seeping in around us, 24/7.

Quoting figures from Venture Scanner, he discussed the huge growth in the number of funded proptech companies, revealing a pattern in recent years where funding was primarily going to innovators in the US and Asia, whereas now we are seeing a greater volume – although not necessarily a greater value – of funding coming to the EU. He went on to say that this shows no signs of slowing down, so it would appear that we have reason to be optimistic about the funded potential of proptech start-ups here.

Helpfully, James broke down the technologies into two distinct categories; firstly, there is the ‘endogenous’ (not to be confused with indigenous!) technologies, which are being built by property people, for property people. These types of technologies are generally built with cost savings or time efficiencies in mind, having deep knowledge of and regard for the existing property processes.  This is probably easier for traditional practitioners to get their head around, almost as a stepping stone as the proptech sector involves over the coming years.

“They are not there to disrupt the industry, they are there to innovate it.”

The second type of technology is termed as ‘exogenous’. This describes the wide range of new technologies that are not designed for the construction or property industry, however, they have applications in whole or in part for the property industry. This includes artificial intelligence (AI),  blockchain technology (I am currently updating my ‘A Guide to Blockchain for Irish Property Professionals’  article and will post here), virtual reality and so on.

He describes where we are now as an educational phase that must be gone through in order to progress. One of the challenges to this progress is that, in James’s  international experience, the industry is still very much dominated by males in their 50s,  people who have been in the industry for 30 years plus, and possibly even been in the same company for decades. These people know their industry intimately, and as a general rule they do not like change.

According to James, despite these industry stalwarts having “a duty of care for their industry to start instigating change… They fundamentally don’t want to change if they don’t have to.”

He also introduced UK bank research showing the pain points in a property buying transaction;  the main one being having to deal with people, including negotiating. This was a difficult point for the room to accept, property is traditionally a people business so to accept that one of the main pain points is around human interaction was unpalatable to say the least. His assertion was backed up by a slide breaking down the information on how respondents of the bank survey (approx. 2,000) wanted to receive mortgage information, which was quite interesting so I will endeavour to get hold of that slide and post it here.

One of the aspects of the presentation that I was most interested in was that of asymmetrical competition, particularly in the context of traditional property portals – the original proptech innovators almost two decades ago! While James was discussing portals in the UK and the US, our equivalent here would be Daft.ie or MyHome.ie.  The case study looked at was that of Zillow in the US and how one of their main competitors is actually Facebook. There was an air of surprise in the room, much the same way as first-year marketing students are surprised to hear that Coca-Cola’s main competitor is milk! On the subject of what is likely to follow the main property portals, I have been discussing this for the past year at least (while beating the drum for digital transformation across the construction and property industries) and over that time I have become ever more convinced that the successor to these established platforms will not be a website or portal at all, but rather AI-enhanced technology that integrates through our existing social media platforms and smart technology on our personal devices and in our homes.   I have delivered a few talks on this and there  is usually someone in the room actively working on this so I look forward to watching this space.

There was also an eye-opening discussion on the value and scope of data, and particularly consumer data held by banks, which could conceivably pose a very real threat to traditional estate agencies , however, this is a much deeper topic and I will save it for another day.

“The traditional property market has a risk of being disrupted from outside of itself… This is the subtlety of warning that the industry will have over the next 5 to 10 year period, where if they don’t start looking inwards at their business models, they could have a risk from outside of the industry.”

There was also a quote from Andy Pyle, head of real estate at KPMG:

“There is the real risk to real estate players that do not convert their acceptance of proptech in adoption. They will be overtaken by rivals that do.”

Are you starting to see a trend..?

Eddie started by posing the question “what’s the point of all this proptech hype when all we hear about from the agency perspective are the challenges?”.  And he was adamant that there are massive opportunities coming down the track to increase and improve levels of service, thereby securing future profits. More importantly, Eddie highlighted potential new profit pools and revenue streams that are opening up to traditional agents who are ready to embrace digital transformation and innovative new technologies.

Also, he noted the opportunity that still exists due to the fact that estate agents are still the main point of contact for both buyers and sellers, and they are likely to be for the next 3 to 5 years. Now is the time to start investing in the technology required to future-proof their businesses.

Almost going back to the start, Eddie broke down the five parts of the property lifecycle that proptech is primarily focused on, whether for commercial or residential property, these are: buying, selling, renting, moving and management of property. In terms of developing a sustainable business model, he pointed out that the first four are transactional in nature, whereas management is an ongoing process.

There was also a lengthy discussion about collaboration (which is the very ethos of Prop-tech.ie and the start-ups we mentor) and the consequences of failing to collaborate in a crowded market place. Eddie referenced an article he wrote on the subject so I will try to track that down and share it.

In terms of adoption rates, our guests were agreed that 10% is the magic figure, which means, this emerging proptech sector in Ireland needs 10% of agencies and property businesses to recognise and accept the business case for fundamental change. This should not be difficult given the scope for increased productivity, leading to increased margins.

As often happens, questions can be more thought-provoking than answers so I will leave you with this final question: For anyone familiar with the Nested business model – could it work in rural Ireland?

As always, Prop-tech.ie is the bridge connecting traditional property professionals with the start-ups innovating for change within the industry; as such, we are learning from each other when it comes to finding and funding solutions.  Email us at news@proptech.ie or info@PropertyDistrict.ie