NewsNewstalkFM: The Picture of Dysfunction in Ireland’s Housing Market 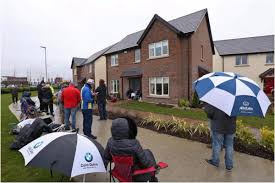 Last Tuesday, RTE and other media outlets reported that up to twenty hopeful house-hunters were queuing (in the rain!) outside a showhouse in Dublin 15, days before a newly development scheme even launched for sale.  This means that the would-be buyers did not know the price of the houses (expected range €300,000 to €500,000) at the time they started queuing.  This is outrageous.

It is important to point out that condemnation of this practice, which is becoming increasingly commonplace,  is no reflection on the buyers – we understand that they are desperate.  The backlash to the estate agency online and in the media was pretty vicious, with many suggesting that it was a PR stunt.  If so, it was a PR stunt that went wrong.  It was clear that the would-be buyers had been grossly misinformed, with one Spanish man claiming that he had been  told this is the only way to buy property in Ireland.  Other buyers reasoned that this was the only way to secure a fixed-price property i.e. with no bidding.  It quickly became evident that the persistent lack of transparency and adversarial nature of bidding on second-hand homes is a huge problem for inexperienced home buyers.  This is particularly frustrating given that technology exists (Beagel.io) and is readily available to solve this problem – it really begs the question as to why some estate agents are refusing to use it or similar technologies …

This story was covered across most of the media, here is a link to a discussion with Newtalk FM’s Ciara Kelly on Lunchtime Live where we talked about the ridiculousness of this, ways to prevent it happening again and practical steps that would-be buyers can take to find out about  new schemes due to be delivered in 2018/2019.