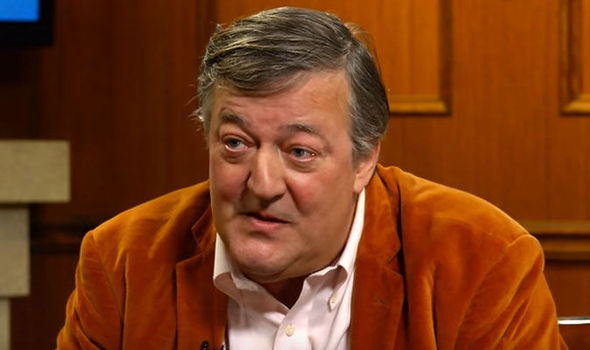 I was not hugely aware of Stephen Fry growing up, he was simply a public figure on the periphery of UK media doing lots of different things that lead me to put him in the category of ‘celebrity’ i.e. someone who is well known for their latest much-publicized endeavour or escapade but that’s about it.  I did not really know him for his stage acting nor for his host of apparently influential coming-of-age books that inspired a generation of self-perceived ‘misfits’.  I was vaguely aware of his anti-establishment, outspoken opinions causing outrage across social media with such establishment-like regularity that any watching cynic might say these ‘spontaneous’ outbursts coincided with his latest project.  Hey, there’s no such thing as bad press… Perhaps that adage has had its day.

Last week, while speaking on The Rubin Report about free-speech and in particular, trigger warnings and censorship, Mr Fry became a true-life example of how these triggers work and why they are important.

“There are many great plays which contain rapes, and the word rape now is even considered a rape,” he said. “They’re terrible things and they have to be thought about, clearly, but if you say you can’t watch this play, you can’t watch Titus Andronicus, or you can’t read it in a Shakespeare class, or you can’t read Macbeth because it’s got children being killed in it, it might trigger something when you were young that upset you once, because uncle touched you in a nasty place, well I’m sorry.

“It’s a great shame and we’re all very sorry that your uncle touched you in that nasty place – you get some of my sympathy – but your self-pity gets none of my sympathy because self-pity is the ugliest emotion in humanity.”

Fry has since apologised.

Trauma is a part of the human experience. That is not to say that everyone has been traumatised in the same way or that they will feel it in the same way.  Trauma is relative.  What affects you might not have the same effect on me.  Similarly, people cope with trauma and latent trauma in very different way.

People who speak openly about their trauma tend to seek out like-minded support on their way to some level of acceptance, whereas people masking their trauma or the effects of their trauma do one of two things, they either hide away from the world or they shout it from the rooftops.  The latter category might choose to campaign or perhaps make a joke of it, after all, what is comedy if not tragedy plus time?

Or they victim shame.

What Stephen Fry did in his unrehearsed, unedited, raw reactionary outburst of victim shaming was give us a greater insight into his residual state than any of his tell-all (read: self-serving) books ever could.

When we reject the pain of others, it is not necessarily a lack of empathy, but more likely a rejection of our own pain.  Why should we give sympathy to others if we feel that no sympathy was given to us.

As I set out from the start, I had very little knowledge of Stephen Fry’s background or private life before watching that controversial clip.  I have studied what is in the public domain over the past few days but it really wasn’t necessary.  In that brief clip, which offended so many, this man told us so much about himself. And it was disturbingly familiar to me.  I had witnessed that level of disgust at ‘victims’ of abuse before.

A few years ago, a friend of mine told me about a claim of sexual abuse made by his cousin against their mutual uncle.  My friend’s response to his cousin was not one of sympathy, nor was it one of confusion or even disbelief.  My friend was angry.  It was not any kind of anger I had seen in him before, this was deep, guttural, violent  anger.  He would not hear of the facts, he would not entertain the claim, his only desire was to seek out and strike down his cousin, physically.  His reaction was completely out of character to the person I knew him to be. Time explained this further.  My friend had experienced abuse as a child and had told no-one.  He got on with his life, or so he thought, and was disgusted by people who felt the need to share their experiences, irrespective of whether this was for healing or for seeking justice.

He was hurt – and in many ways continued to hurt silently – but received no sympathy, why should anyone else get sympathy.  He felt disgusting so wasn’t his cousin disgusting?

Triggers are not psychological myths created by an overly-sensitive nanny state, they are  real and they are powerful and the reactions they cause are unpredictable.  Far from convincing us that trigger warnings are unnecessary, Mr Fry showed us how terribly important they are.