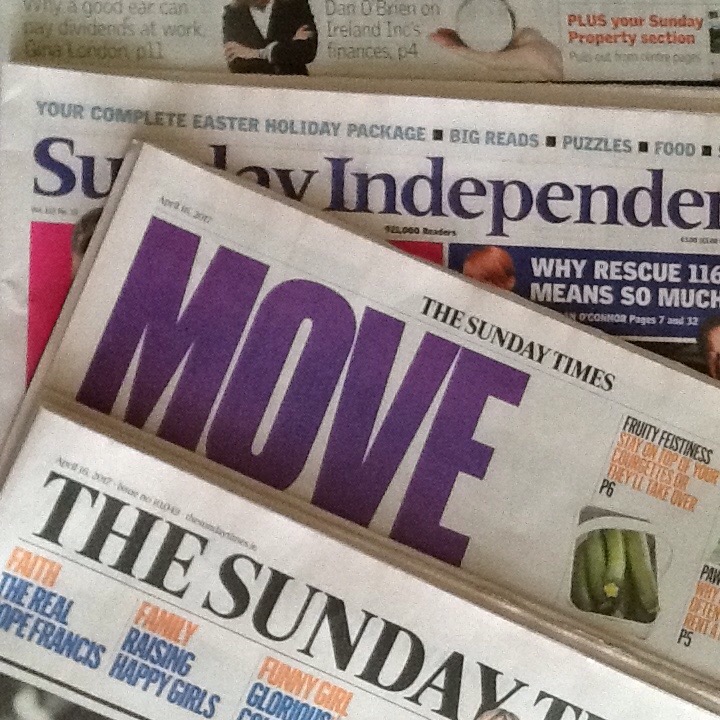 Linda Daly writes about the restored Carriage House at Beech Park in Clonsilla, near Luttrellstown Castle. This 19th-Century, two-storey cottage on nurtured, plant-filled gardens is available to rent, check out www.thecarriagehouse.co for full details.
And from one bespoke home to another – this one is actually for sale – ‘Country Pile’ features an idyllic home in West Cork, close to Skibbereen. Four bedrooms, lush gardens, cut-stone finish and wooden cabin-style outbuildings on just over an acre make the asking price of €425,000 attractive for house hunters in the area.

Arlene Harris writes about a topic close to my heart ‘Give a dog a home? It’s hard to do if you are a tenant’. This is an issue for so many tenants and prospective tenants that I speak too. At different times, I have been a tenant with dogs and a landlord with damage created by tenants’ dogs so I genuinely understand both sides of the debate. This article gives useful advice as follows:
1. Allow extra time to find an accommodating landlord (will be difficult)

2. Be prepared to compromise on location and property type

3. Give prospective landlords plenty of information about your pet

4. Introduce the landlord to your pet (this one worked for me despite a ‘no pets’ policy!)

5. Be prepared to spend a little more in rent or offer a larger security deposit

6. Do not risk sneaking your pets in, be upfront with your landlord but be smart about how you approach this conversation.
House hunter Eithne Shortall writes ‘We need new builds, but I want a wreak’ and so many would-be buyers will understand what she means. Most people want the price-certainty of a new build with the character of a fixer-upper.

‘Subletting proves to be firms’ flexible friend’ by Grainne Rothery is a timely and relevant piece for businesses that are struggling to keep up with their fast-changing office requirements. It also takes some of the mystery out of first lettings for start-ups by making sublets accessible. They generally come with little long-term commitment and no fit-out costs as they are ready to go. While there was a shortage of this type of commercial space until recently, supply has now increased to 9% of total market supply – up from 6% this time last year – and is set to increase further.

Tech companies are the main drivers of this, with many doubling their space year on year. [On this note, we have some exciting news about heavily subsidised hot-desking space for PropTech startups in Dublin 2 coming later this week – enquire and register your interest at news@prop-tech.ie]

Katy McGuinness writes about the stunning Whitechurch property, a former cottage turned Victorian-style manor in Straffan, County Kildare. With eight acres, equestrian views and a fairly hefty price tag (€1.3m), this is quite a special property but perhaps not for everyone.
The ‘Four of a kind’ selection are four starter homes for first-time buyers in Tallaght.
In the ‘Real Deal’, Phillip Farrell has a great cross-section of property news and talks about a new sector in the property market – the rise (no pun intended) of Pop Up shops. Leading the charge is Lucinda Kelly’s innovative PropTech company Popertee, which specialises in bringing retailers and the controllers of vacant and underused spaces together.
Ronan Lyon’s column ‘Census figures bring a bombshell’ makes for interesting reading – if you only have time for one property article this Sunday, this is the one. Did you know that we are apparently “still cramming people into homes”? After being raised within a family of nine in a four bedroom house (and I thought it was huge!) and now fighting for space in a three bedroom with only a teenager – and two admittedly boisterous dogs – I genuinely thought this trend was going in the opposite direction. What’s interesting about this is that for the last 50 years, household sizes have been falling – until now. Supply must surely be considered to be an attributing factor: “Households can only form if there are dwellings for them to form in.”
Also, more than 40% of recent population growth (166,000) in recent years is from households with non-family members living with them or households where there are no families at all. From this, we can determine a “complete failure of housing supply to respond to new demand over the last six years”. To conclude, Ronan, points out that the country has been getting one-third the actual number of new homes it needs, which he estimates to be 40,000-50,000 per year.

Similar to the commentary from other commercial commentary, Ronald Quinlan comments on the continuing strength of the Dublin office market, quoting separate reports this week from agents’ research heads Marie Hunt of CBRE and Hannah Dwyer of JLL. High tech sector and public sector are the dominant tenants. JLL report on increased post-Brexit site visits as enquiries from London-based companies gather momentum.

I don’t usually include TheJournal.ie  in my Sunday Property review but as I wrote the article in question, it makes sense to include it here!  It’s an opinion piece about the recent Irish Planning Institute AGM and, in truth, I was prompted to write it after a reading a rather unfair piece in the Sunday Business Post last week by Matt Cooper.  In it he attacked the local authority planners, and while he raised some very valid points, it was damning indictment written with very broad strokes.  I simply wanted to offer another perspective…