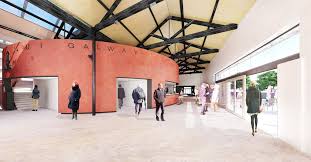 My first ever camping trip and a few days rediscovering the Wild Atlantic Way, all the way from Sea Sessions in Bundoran to the cliff walk in Ballybunion, means that the weekly property round-up only takes in property news up until Friday – please send carrier pigeons west if there is any breaking news on Sunday.

Speaking of going west, I have spent the last few weeks touching base with independent estate agents nationwide (particularly in the West) and reports on local market performance are hit and miss at best; as I start updating the Irish Property Buyers’ Handbook for 2018, I am interested to see what is happening in towns and villages across the country.   I am also keen to gather case studies for the new edition so please email your local property news and experiences to me at Carol@CarolTallon.com.

Some positive new to kick the week off; Ireland has voted and the O’Donoghue Centre for Drama, Theatre and Performance at NUI Galway has come out on top (pictured).

ESRI says rapid rise in house prices not a bubble

This article by Eoin Burke in Thursday’s Irish Times carries an explanation by the ESRI that “while new credit is growing strongly in the residential market and to construction SMEs, this does not appear to have occurred at the expense of good credit risk assessment”.  The institute does, however, predict continued increases in property prices and rent for the foreseeable future.

All newspapers this week carries some version of the story that new Minister for Housing, Eoghan Murphy, is reviewing the controversial scheme and, as the week progressed, more and more property influencers came out to support him.

The measure never made sense and few in the industry believed that it could genuinely stimulate supply.  To hear reports of it driving prices of new homes higher surprised even fewer.

According to CIS (Construction Information Services), 90% of Irish crane drivers are due to go on strike on the 13th July, which is likely to cause problems on  major sites all around Dublin.

In his column in the Irish Independent, editor Mark Keenan, writes ‘Grenfell screams to probe Tiger apartments now’.   His sentiments echo what many within the industry have been calling for, long before the London tragedy. And he asks the question aloud that so many people dared not, that is, could this happen in Ireland?  He chronicles fires that have spread across new developments here in Ireland since 2011, and fire safety remedial works that have been mandated to compensate for shoddy or defective fireproofing during construction stage.  Significantly, Mark calls for the publication of a ministerial report on fireproofing, commissioned in 2015, that has yet to be released by the Department of Housing.