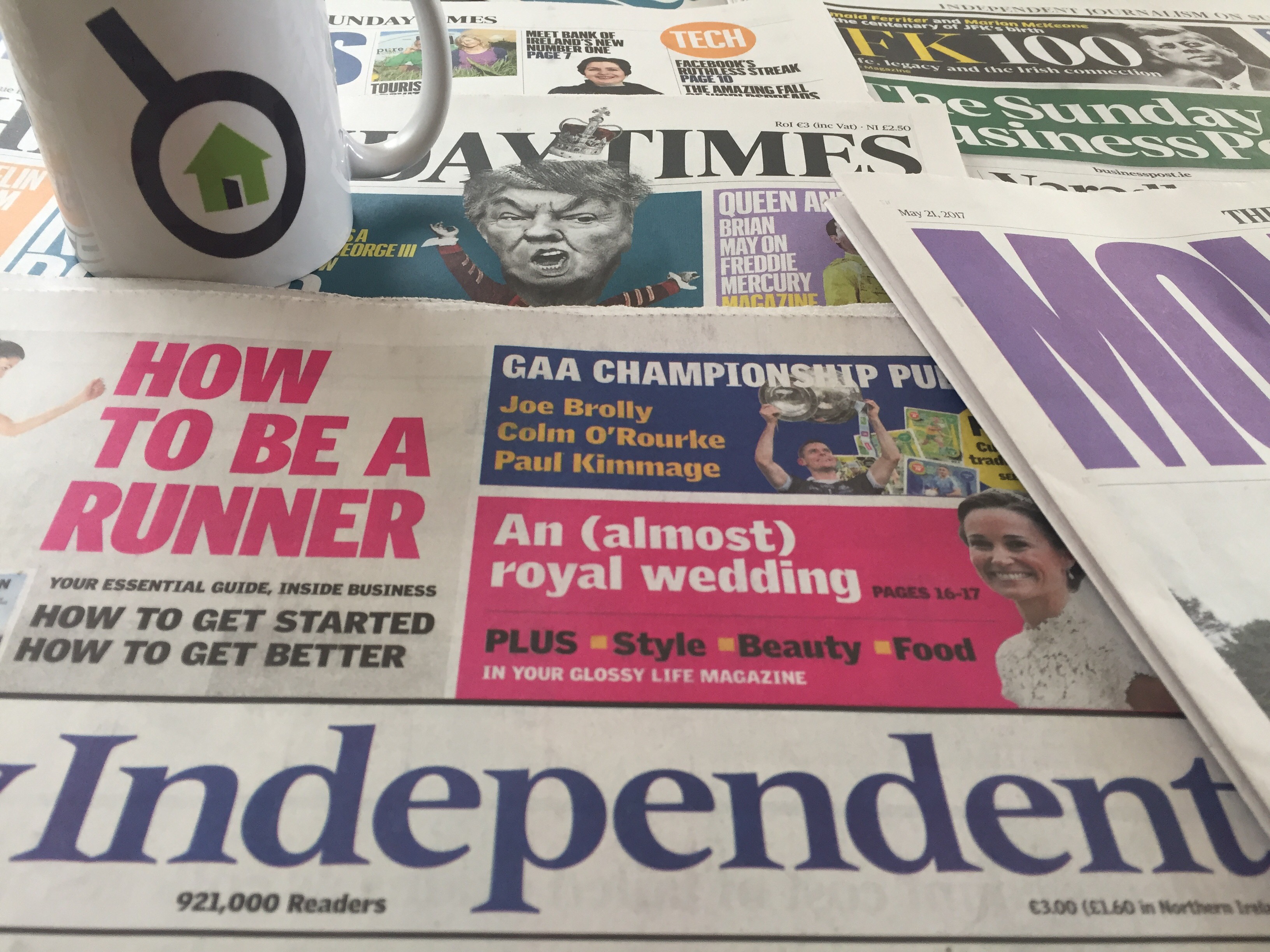 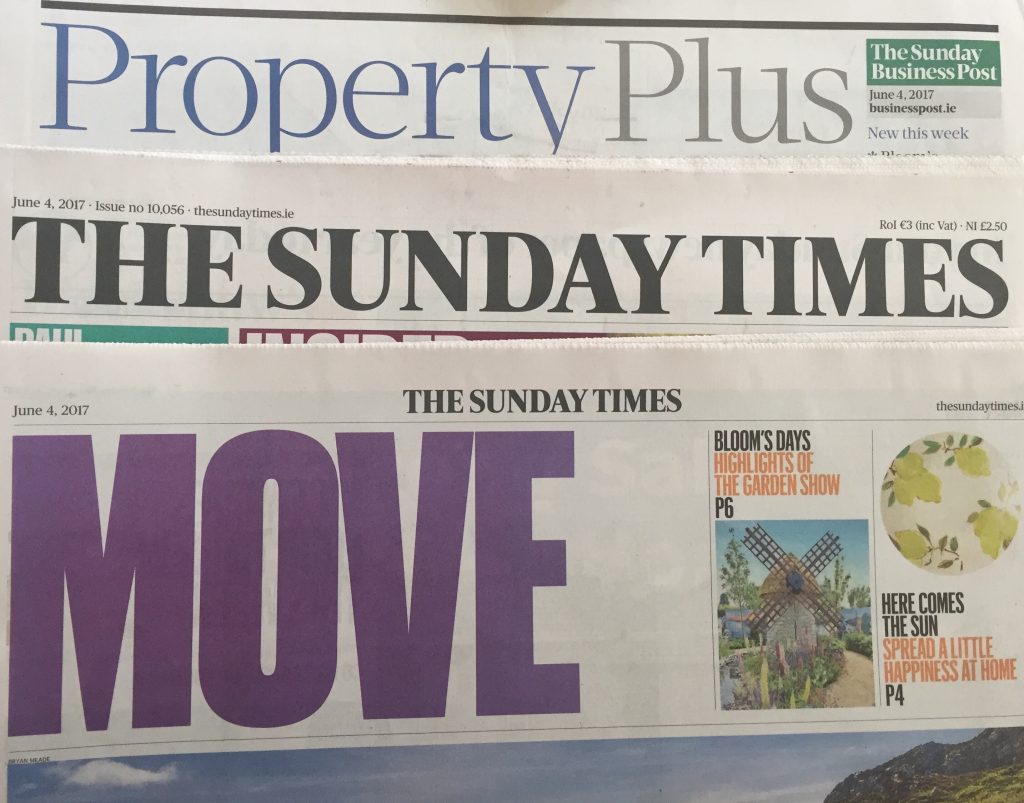 As mentioned last week, the property supplements are slowing down for the summer so all reading in this weekend’s broadsheets is a shade lighter than usual.  Bear with me as I dig through other sources to pull together the most important (or not important at all but mildly interesting) property news.

Last week I wrote about the introduction of new regulations for the Irish rental market, Statutory Instrument No. 17 of 2017:  HOUSING (STANDARDS FOR RENTED HOUSES) REGULATIONS 2017 (download here: S.I. No. 17 of 2017 in PDF).  The key changes relate to improving fire safety and air quality in rented units.  The other important aspect of  these new regulations is that they reinforce the previous ban on bedsits (below 6.5sq.m) by prohibiting shared kitchen and bathroom facilities and require individual unit metering for utilities.

In The Sunday Times, Hannah Kingston writes ‘Estate agents find space to rent bedsits despite the ban’.  In the article, she sets out that 15-20 bedsits were available to rent in Dublin last week via property portals Daft.ie and Rent.ie.  Reading through the article, it would seem to me that there is confusion between bedsits and studio apartments (kitchens vs. kitchenettes).

Of course the quality of rental accommodation must be managed; however,  we need to question whether or not it is helpful  in a market of rising homelessness, chronic shortage of rental accommodation and unaffordable monthly rents (entirely out of whack with our social housing assistance)  to eliminate the estimated 3-5,000 bedsits from the lower end of the market?  I don’t generally buy into the ‘property ladder’ notion, but there are definitely different levels of what people in different financial circumstances deem acceptable.  Can Dublin afford to exclude the entire lower ‘rung’ of the ladder and tell renters that €1,000 is the absolute minimum rental; if they cannot afford to pay that, then they cannot afford to live and work in the capital?

This is nonsense and I hope our new Housing Minister does not see this as a fait accompli.  In a market emerging from crisis, perfect is the enemy of done. We need to get it working at a basic level and then improve it. I am certainly not calling for the return of the grotty bedsit, but we do need to introduce a lower ‘rung’ on our increasingly unaffordable housing ladder.

Applications to local authorities under the ‘repair and leasing’ scheme remain low, with only 14 applications to Dublin City Council so far.  This figure is lower in other areas, with Galway city attracting zero applications to help them hit their target of 24 new social houses through this particular scheme. Interest appears to be highest in Cork, where the target is to deliver 50 ready-homes and 40 applications have been received to date.  This scheme, when introduced by former Minister Simon Coveney, was expected to facilitate the delivery of up to 800 social homes nationwide.  I cannot help but see the opportunity for the private owners of derelict or vacant (for 12 months+) properties around Ireland to finance the upgrade of these units – up to €40,000 each – and then let it to an approved housing body for 10 years. A further €108 million has been set aside for this scheme until 2021 so it is definitely worth considering.

Conor Skehan writes that ‘Only a whole of Government approach can manage housing’, and he is entirely correct.  We know that no fewer than 17 state and semi-state bodies already feed into housing policy so a more holistic and integrated approach makes sense.  He refers to the  use of housing supply  alone to deal with the aftermath of the housing crisis as a mistake.  Housing, he writes, “does not obey the rules of conventional economics – mainly because of investors… At some point the prices begin to reflect the hopes of investors, rather than what can be afforded by home owners- and a housing bubble begins.”  He advocates for the management of housing rather than just focusing on supply.

If you only have time to read one property article today, this is the one I recommend.  It’s a sensible read that puts our stage of recovery in context and, arguably, calls for us to re-examine more recent policy changes.

The Sunday Business Post is a great read today, if you only pick up one newspaper today, this is the one.  There are two special reports, the first is ‘A Tsunami of Repossessions?’ (note the question mark and not just the headline) by Francesca Comyn.

The second special report looks at the Iveagh Market regeneration project in Dublin ‘How a €100 million regeneration project stall : 20 years in limbo’.  It makes for interesting reading, not necessarily property-related but it does question the process of community involvement and engagement – it also has the best image that you will see in a newspaper today!