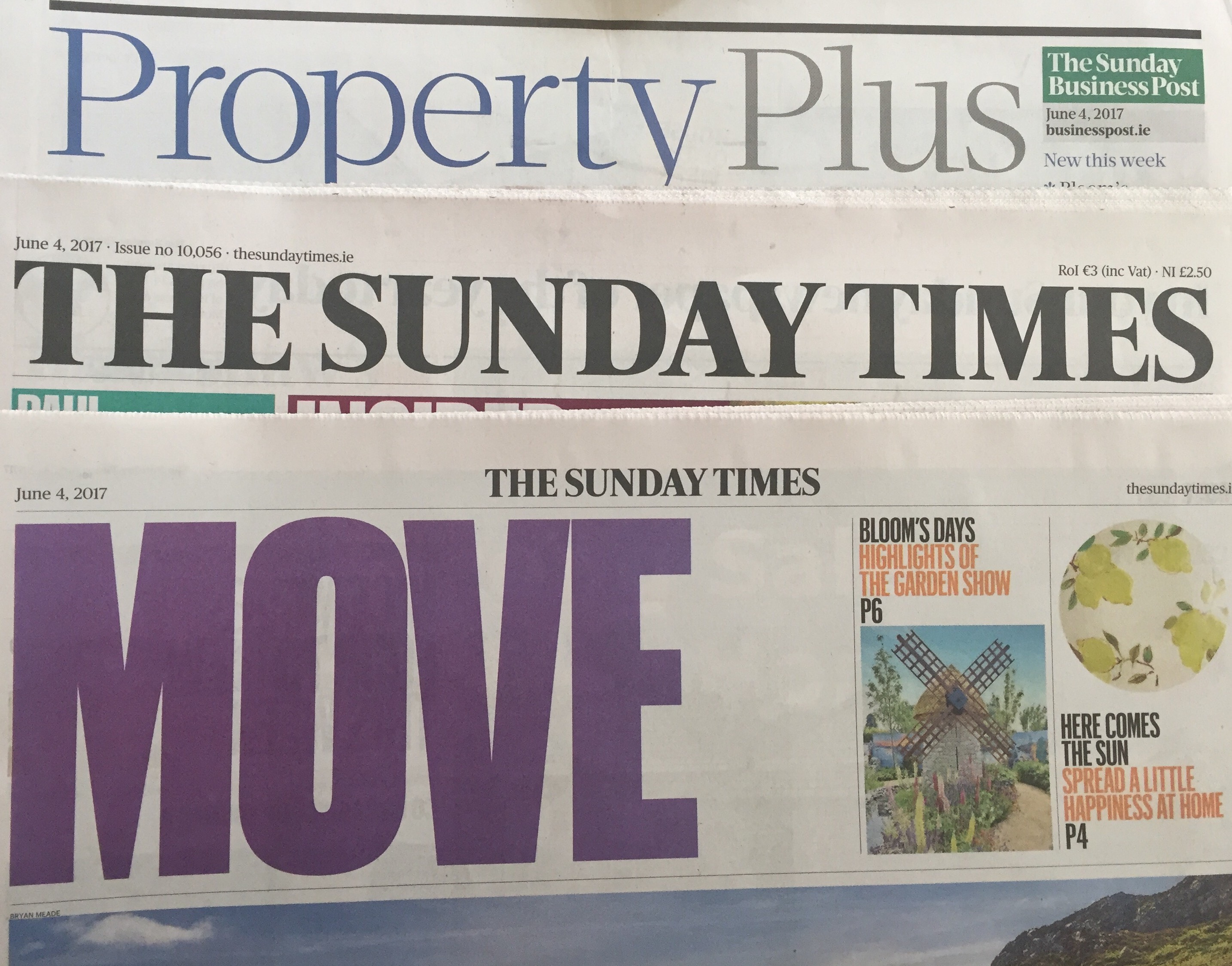 As regular readers will know by now, the property supplements slow or stop altogether for the summer months so I will be taking a look at property and broader property-related stories from across the main broadsheets.

First up, Dublin’s crane count is back at 69 this week (76 is the highest recorded over the last few years).

One of the biggest stories of the week was the action launched against BAM building contractors by residents of Ceann Fort neighbourhood in Dublin 8 in respect of “significant damage and subsidence during preliminary work” being carried out for the new children’s hospital.  It is claimed that a row of 14 houses suffered damage when rear garden walls were removed and a trench dug.  It was previously negotiated with residents that in exchange for allowing the work to be carried out, they would each get larger gardens  but the residents are claiming that the works caused cracks and subsidence in their homes.  The case is ongoing and is back in court on Wednesday, meanwhile, works in that area of the site have been suspended.  We will keep an eye on this as the case progresses.

This is the newspaper to beat today for the best property-related content (still lighter than usual but that’s normal for this time of the year).

The featured front page property is none other than race trainer John Edwards’ Tipperary stud, Longstone House.  This significant period home has been entirely renovated since bought it in the early 2000s.  It sits on 50 acres of prime equestrian land with stables and equine facilities.  Selling agents are Savills, quoting €975,000.

In his column, Lorcan Sirr writes for tenants ‘If you rent, be grateful you’re not in England’, explaining that while the Irish system is certainly not -perfect “landlords and tenants in the UK could learn a lot from us”.  He is referring to our system of tenancy registration (via the RTB), dispute resolution service, data collected/creation of a rent index, the new rent pressure zones (RPZs), lease lengths and notice periods.  All of these, he claims, makes the Irish rental market superior when assessed against wider European standards and credits former Housing Minister Simon Coveney.  All of this may be true but it does little to encourage new landlords into the market at a time when many of the most pressing issues are caused by the prevailing lack of supply.

Grainne Rothery delivers one of the few early investor advice pieces on getting started in commercial property and it’s excellent – check out the front page of the MONEY section (page 9).  In it she writes that ploughing wealth into commercial property can be lucrative but risky.  Funds like New Ireland Assurance and Davy report yields of 4.6% to 4.9%, while estate agents report returns of 6% to 8%.  The Irish Life property fund starts at €1,000 to join, but that figure jumps to €100,000 to join a qualified investor alternative investment fund.  For more flexibility, consider the REITs – like Green/Hibernia/Ires – as they provide a more liquid investment opportunity.  The article considers whether private syndicates are a thing of the past; I remember how popular these informal joint ventures were prior to the crash.

Page 23  carries the headline ‘The school without a skyline’ by novelist (and former pupil of Clonkeen College) Colum McCann.  The piece refers to the controversial decision of the Christian Brothers to see more than seven of its 11 acres of playing fields at the secondary school to developers.  One the face of it, the sale is being attributed to a €10 million debt owed by The Brothers to the State under the redress scheme for survivors of abuse.  The sale is likely to generate €18 million and the balance of sales proceeds will go towards looking after the elderly brothers abroad.  McCann writes an emotional and imbalanced plea to protect the lands from “the increasing myopia of unbridled property development”.

What utter nonsense.    The eventual buyer and use of the land seems to be a secondary or even tertiary issue, after compensating victims of abuse and other commitments of The Christian Brothers.  It’s been a while sense we have seen such an exemplary display of NIMBY-ism  (not-in-my-back-yard) and misplaced anti-developer sentiment.  Again, nonsense.

On page 4, respected architect Des McMahon tells Tom Lyons that he is “flummoxed” by the decision of DCC to reject developer Johnny Ronan’s proposed 22-storey tower on Tara Street as the proposed building had the power to become a catalyst for urban development.  The plan was turned down on grounds including ‘visual impact’.  Johnny Ronan points out that Ireland risks falling behind international rival cities if all tall buildings are blocked.

On page 28, there is an interesting piece on “the race to fill Dublin’s dearth of student accommodation”.  This is something that I have referred to on this website on an almost-weekly basis for the last few months.  We know that the student population is due to grow by an estimated 15% over the next cycle (seven years) and we have seen a race for suitable development site by existing and new players in this sector over the last year to 18 months.  This article reports that Hines are expected to deliver  1,700 over the next two to three years.

Click-bait, non-story of the day:

Michael Martin is quoted as saying “We’re going to build houses, and to hell with this” – in the small print ‘if Fine Fail are returned to government’.

David Conway, a 37-year old Irish construction worker in Australia fell seven storeys on a building site earlier this week and remains in critical condition. I know that the majority of readers here are from a planning, construction or property background (in fact many are recent ex-pats still in Australia or recently returned) so I wanted to share the funding page has been set up by family and friends of David’s at www.youcaring.com/davidconway-878465  Every best wish to David and the Conway family in Rathcoole.