NewsSunday Property Round Up: June 11th 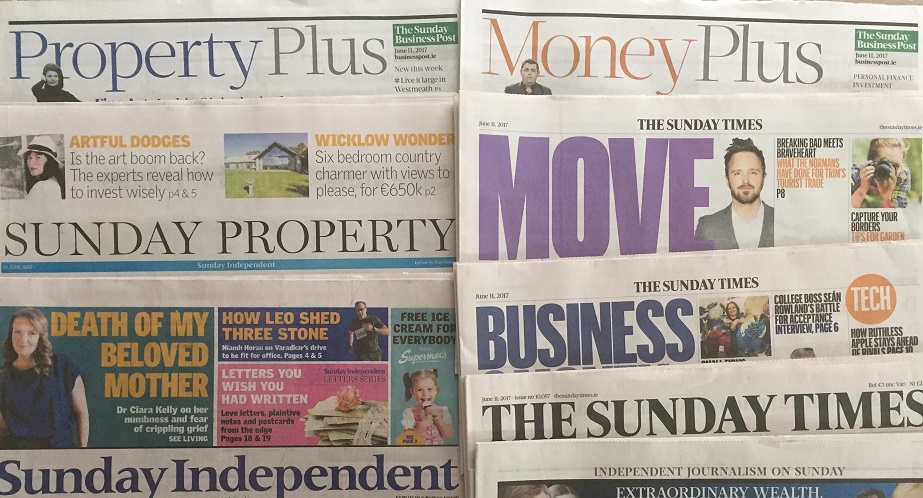 As expected, the weekend’s newspapers are dominated by the fallout of the UK vote so the property coverage in the main sections (outside of the property supplements) is limited.

As regular readers will be aware, I am a strong proponent of digital marketing and PR as a tool for contemporary estate agents; however, for the last few months I have, together with the Property District team, been looking at ways for  independent agents to enhance their brands and reputations off-line with potential sellers and developers.  To that end, we have taken an old-school, cooperative approach and the first stage of this can be seen on page 3 of The Sunday Times property supplement today (pictured).  Independent estate agencies nationwide are welcome to join us, email info@PropertyDistrict.ie for details.

Also , this is shaping up to be a particularly busy week as I will be speaking at the National Building Summit on the topic of ‘Embracing disruption: Preparing for the digital construction economy’ and at the National Planning Conference on the topic of ‘The digital future of urban planning’.  Anyone who is unable to attend these events but would like to receive a copy of the presentations/notes, please email me on Carol@CarolTallon.com. 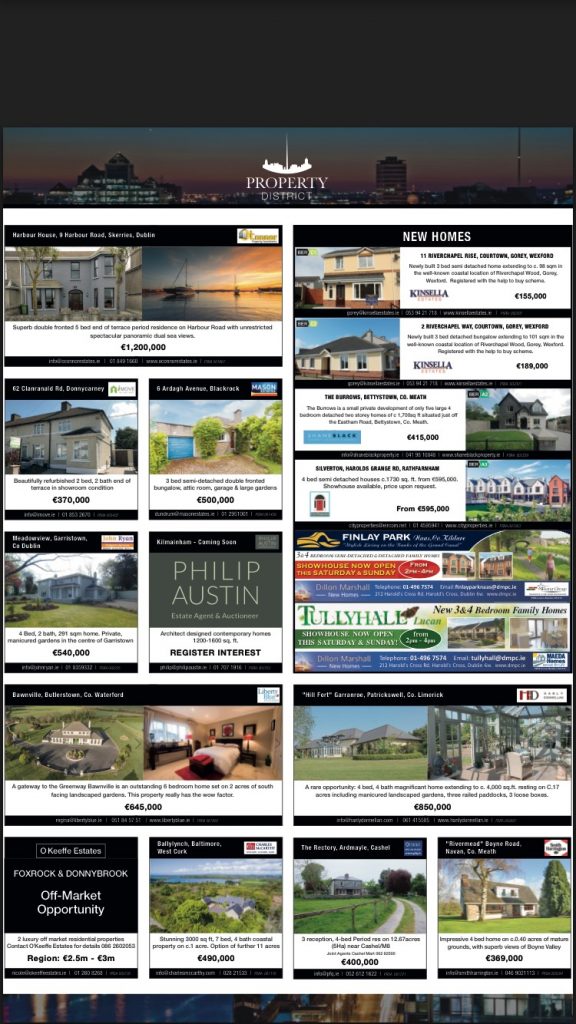 The featured front-page property this week is a truly magnificent late-Georgian country home at the foot of the Kcockmealdown Mountains, built in the Regency style.  The 330 sq.m house is described as “a time capsule of sorts, with parts frozen in the 1920s, others in the 1970s”.  The key attraction here is the 37-acre plot, of which 12 acres are landscaped gardens and once commanded the title of “one of the loveliest in Ireland”.

As mentioned above, page 3 carries listings from independent estate agents across the country.  Properties of note include:

Off market properties in Kilmainham (via Philip Austin Estate Agent) and in Foxrock and Donnybrook (via O’Keeffe Estates, Sandmount)

Grainne Rothery writes about how Dublin’s office rental market is being boosted by Georgian buildings on the south side of the city, now achieving €430 to €480 per sq.m, this is a massive jump on prices from 18 months ago of €320 to €375 per sq.m, according to firms GVA Donal O’Buachalla and Murphy Mulhall.  Premium figures are based on letting the floors individually rather than letting the building in its entirety.

Also, there is an interesting piece with the headline ‘Sligo retail suffers amid development drama’, discussing the findings of another CBRE report on the retail sector.  The chief executive of Sligo Chamber of Commerce, Aidan Doyle, has refuted the findings on the basis that it is not a true reflection of activity in the town.  High vacancy rates have been attributed to title/legal issues and on-going development and improvement is expected quite quickly…

Constitutional right to a home?

In his column this week,  Lorcan Sirr calls for the State to enshrine the right to a home in our constitution, as happens in 81 other countries.  He calls it a question of dignity, it is difficult to disagree with this.  From my early days as a student studying law almost two decades ago (most of it long forgotten) I believe that the constitution must be considered context of the era when it was written and then interpreted for modern life (this rarely happens).  Property rights are constitutionally protected – with obvious examples including CPOs –  but this essentially protects the right of the owner to retain said ownership, it does not confer any right to non-owners.

While it is not property-related, there is a genuinely helpful guide to investing in art in the property supplement this week.  Also, incoming IPAV president, Brian Dempsey, writes a nerve-hitting piece on why confidence dictates the Irish property market.  And, he is correct.  While confidence alone is no silver bullet, lack of confidence poses one of the biggest threats to any market.  Brian describes the Irish market situation well by stating “A solid direction is very hard to find”.   Like most columns written by honest  commentators, there are more questions than answers but that is indicative of the marketplace in which we find ourselves.

Ronan Lyon’s column looks at the aftershocks from the crash and the footprint left on Irish policymaking.  He differentiates between the credit supply that emerged in the bubble, and the housing supply problem.  While lack of regulation might be blamed, Ronan encourages us to examine matters closer to see the underlying problems like skewing the tax system in favour of properties that would not otherwise have been built (for example, section 23 developments).  He also talks about the harm or cost of additional regulation, citing that “one regulation alone adds an extra 50% to site costs. Every €1,000 in costs adds €50 to the break-even monthly rent”.

I was excited to see a proptech headline but it was a bit of a mis-sell, instead,  the SBP this week is dedicated primarily to new homes, featured developments include:

Colin Murphy writes that ‘Varadkar should let Coveney get on with the job he started’  by setting out how the current minister has shown creative thinking and flexibility in his handling of the ongoing housing crisis.  [I would add compassion, commercial reasoning and willingness to make difficult decisions to that list.]

The land hoarding battle rages on (every sector, state agency and commercial organisation blamed in turns blames the other…).  In any event, the headline reads that  tens of thousands of homes (22,000 in Dublin alone) with planning permission are not being built.  The gouging of land hoarders  versus the viability of building debate continues.

Finally, Tom Lyons tells us that JP McManus’s family are behind the €100 million Chelsea mansion that, once finished, will be the most expensive home ever owned by an Irish person.