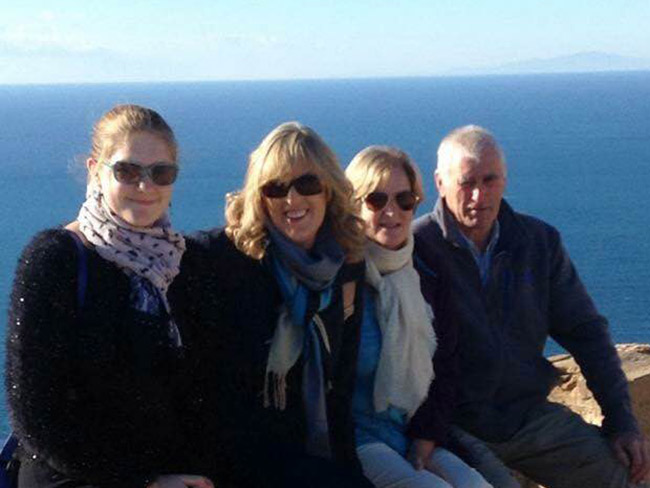 I have never considered myself an emigrant. Yes, I have left Ireland at least three times in my life with the intention of working but I always left with the intention of returning to Ireland within a few years. On the first two occasions I returned to home soil within a few months. The first escape was to London and the few months spent double-jobbing below minimum wage motivated me to return to Ireland to study. Ten years later I tried again, this time with degrees and young daughter in tow, I made for the South of France. This move was an experiment in remote working, I was planning to work in the mornings, file work over the internet and spend the afternoons on the beach. It sounded perfect but my plan was not without it’s flaws, principally, I was running my own business in Ireland. Within a few weeks it was clear that my business was not ready for a remote owner/manager so we accepted our fate and – after an entirely pleasurable sojourn between Cannes and Monaco – we returned to Ireland. I threw myself in my business in Ireland throughout the economic crisis, however, foreign shores were calling and a holiday was never going to be enough. And that is how I found myself living in Spain with my daughter enjoying her transition year in a local school, which lurched precariously over the sea, learning Philosophy and Latin through French and Spanish. My work as a property writer and market commentator in Ireland and the UK continued remotely for a while but the unconsidered truth of the matter is that travel changes people. A new setting changes the mindset. Past goals become irrelevant and, little by little, our new home becomes us. Perhaps that it why so-called emigrants seek out the hidden Irish taverns down the side streets of foreign lands, to keep us from becoming a part of our current landscape for as long as possible; to ensure that we are wearing our Irish identity. Still, I did not consider myself or my daughter to be emigrants. With thanks to the technological advances of social media, video chats and message streaming, Ireland felt very close. Yes, Ireland felt very close, until I needed to be there…

One balmy Saturday evening, in our little corner of Spain where the desert meets the sea, I sat on the terrace, refilled my wine glass and relaxed into the view. “Jamie sent me a message, you have to contact John urgently”. It took me a moment to process what my daughter was saying; ‘Jamie’, ‘John’, ‘urgently’. Something was wrong at home. Within that moment I just knew. Of course it was bad, nothing good is talked about ‘urgently’.

I phoned my brother John, he only had to say a few words “It’s Dad. I’m sorry” I cannot remember the rest of the conversation, maybe we didn’t have one. None was needed. Dad was gone. In a single moment everything changed. I could not believe, I had seen him only two days earlier. He and my mother had spent 10 days with us in our adopted home of Spain, I had driven them both to the airport on Thursday evening. It didn’t feel like it could possibly be true.

I have always believed that every day brings with it moments that have the potential to change our lives but in my naivety, I did not understand what that meant, until now. Until that message.

The world has become more accessible in recent decades and this is a good, and important, thing for a small island nation. Spain is a three hour plane ride away from Ireland but at moments when your life is falling apart, that distance – or any distance – feels interminable. At 9pm on a Saturday night, I was in Spain when the place I needed to be was Ireland. Home.

Flights were arranged for the following day at 3pm, which felt like an eternity away. How could I not be in Ireland right now? How could my Dad not be there? How could everything be just gone? I cannot even remember that night. My teenage daughter, who was very close to my Dad, was distraught. There was no comfort and that three hour distance might as well have been interplanetary. There was no way home tonight and somehow it felt that when the world woke tomorrow, if this was real, home would no longer be home. The world would be different. This sense made me not want to sleep, as if by staying awake I could stop the sun rising and we would remain in this day, a day that my Dad had woken, and gardened and drank coffee and existed.

But morning came. Reality remained and a wave of numbness kicked in. And the numbness was a relief. It softened the feeling of being isolated. Not just emotionally, but geographically. I have been a single parent for most of my daughter’s life but that night was the most alone I have ever felt. I could not bring myself to contact friends, locally or in Ireland. I could not find the words to explain how life had changed, how this wonderful, strong, interesting man was just gone. There was no warning, no deteriorating health, no accident; he was gone. It was as simple and as confusing as that.

We got to the airport, a small, regional airport that services a handful of flights daily and we were hours early. As we entered the abandoned terminal, where not even the security personnel had taken up their posts for the day, the only other traveller was a man, who we presumed to be Irish due to his Tipperary GAA jersey. And a realisation came crashing down that I was standing in the place where where I had last seen my father. Where we had hugged our farewells and made plans for our next trip to Ireland and my parents’ next visit to Spain. If I had known that was going to be the last time I ever saw him alive, would I have said something different?

While at the airport I received a message from a cousin,whom I had not seen for many years. The message was a short one but one that was loaded with ‘journey back’. And she knew. Several years ago her mother had died suddenly. She too had gotten that sickening phone call, she too had to concern herself with comforting her children, while organising clothes and packing for home, for a funeral, just to get to the airport, the effort it takes to wait for the plane, the feelings of urgency to be home and perhaps she too felt the descent into the Irish airport as marking the end of a huge part of her life. I have often read that we only ever mature into full adulthood following the loss of a parent, perhaps this is true. Or more likely, we do not stop to think about what stage of life we are at because, up until this point the lucky ones among us have the unquestioned cushion of unconditional love and support.

Immediately after the funereal I contemplated moving back to Ireland as I thought that it would be the right thing to do, for my daughter and perhaps for my mother. ‘Home’ is not just about the economic opportunities and the price of houses. I wonder, do emigrants leaving their country and their family understand that if they stay away for a long period of time, it is very likely that they will be making this journey of sadness? Or worse, when that dreaded phone call comes, will they be able to make that journey home at all? The irrational guilt of having left hides somewhere in the back of the mind.

I realised that up until the moment my father died, I had only ever felt empathy but never before had I experienced grief. There is a hierarchy of grief, once there was someone closer to the deceased than you, the feeling is empathy not grief. Empathy is a selfless emotion whereas grief is incredibly selfish. There is a sheer indulgence with grief that you can try to fight but it will consume you; fighting only delays the inevitable. There will come a point when you have to give in, that might be for a private moment, or for a day or even a month but the way that I have come to think about grief is that it is like a tunnel that you have to go through. You might not know how long this tunnel will be when you enter but know this – there must be an exit to that tunnel. What lies that the other end will definitely be different to the life you know. And you will be different, but that’s okay. Just remember, a tunnel without a way out fast becomes a cave.

If I had known when was going to be the last time I ever saw my Dad, would I have said something different? Of course I would have said something different or at least something more, I would have said everything. I would held on so tight and never let go. But life is not like that, and death is not like that. Facts remain. For as long as I live, that little airport in the middle of Spanish nowhere will always be the last place I saw my Dad. This is now a part of my life story. This gives Spain a much bigger part to play within that story. And as more of my life evolves outside of Ireland, and less remains in Ireland, the word ‘Home’ loses some of it’s power. My home is now where I am with my daughter; but it is also where my mother is; and it where my friends and family are – right now, that is not any one country. Perhaps as the years roll on, nostalgia with exaggerate my Irishness and tug on my heartstrings, but today, this gap in my heart will not be filled by any place, but rather by rebuilding family relationships and redefining what ‘Home’ means to me.